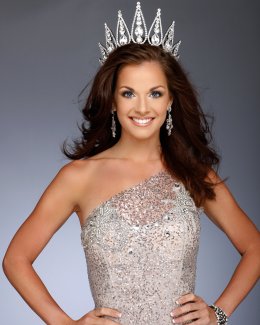 Ashley Elizabeth Smith was crowned Miss International® 2010 at the annual Miss International® Pageant held at the North Shore Center for the Performing Arts in Skokie, Illinois. Along with the honor of representing the other beautiful women competing for this title, Ashley is excited to use this crown as an opportunity to speak about her passion, breast cancer awareness and early detection.

Ashley moved to the great state of Texas when she started high school and went to college there as well. She has her Bachelor of Arts in Communication with a minor in English from Texas A&M University, and her Jurisdoctorate from the University of Houston Law Center. Even though she represented the Lone Star State of Texas at the pageant, Ashley has just recently moved to Washington, DC. She is very excited to take her message of breast cancer awareness and early detection to our nation's capital.

The message that she wants to share is one that is very personal to her. Ashley's mom and one of her grandmoms were both diagnosed with breast cancer within a few months of each other. Unfortunately, her grandmom died a few years later because she simply did not know all the facts about her disease. She did not know or understand the importance of being tested early, and for her it was too late. Ashley's mom on the other hand, is a 16 year survivor thanks for early detection! She got her first mammogram at 38, the doctors detected the breast cancer then, and she is now cancer free!

Along with volunteering for various breast cancer organizations, Ashley also has worked to raise money for the Muscular Dystrophy Association and Cherish Your Skin, an organization that works to increase skin cancer awareness and prevention through education.

Throughout her year as Miss International® 2010, Ashley will also be working with the American Heart Association's Go Red for Women organization to bring awareness about the risks of heart disease as it is the Number 1 killer of women in the United States today.